The Best Drones of 2020 to Use for Drone Photography

For most of 2019, all was quiet in terms of new drone releases. DJI, the industry’s dominant manufacturer, has spent recent months focusing on niche commercial hardware and other consumer photography gear, including the Phantom 4 Multispectral and the Osmo Action Camera.

We’ve had a long wait between the unveiling of the Mavic 2 and Mavic 2 Zoom in summer 2018 and the newly released Mavic Mini. For drone enthusiasts always eager to see what’s coming next, it’s been quite a drought.

In part, this slowdown is a reflection of where we are in the consumer market. We’re now seeing incremental improvements rather than radical leaps. But there is still plenty of innovation going on, even if the pace of releases has switched down a gear.

While DJI has arguably been focusing efforts elsewhere, Skydio has launched a new drone that looks set to give would-be DJI customers a genuine alternative. French manufacturer Parrot is still on the scene, too. 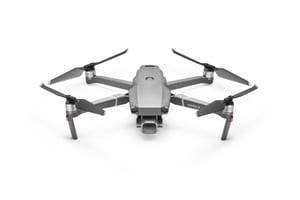 The Mavic 2 was launched in August 2018 as DJI looked to phase out the original Mavic Pro, which was hugely popular and remains an industry benchmark for its balance of portability and capability.

The Mavic 2 is DJI’s attempt at upgrading the original without losing the essence of what made it so great in the first place. It has an improved camera, a longer flight time, and more advanced safety features, while retaining its foldability and compact size.

The Mavic 2 is DJI’s most sophisticated consumer drone. With omnidirectional obstacle sensing it’s also one of the safest around. DJI’s long collaboration with Swedish camera specialist Hasselblad has led to a bespoke camera that offers industry-leading image quality with a 20 MP 1” CMOS Sensor and adjustable aperture.

The addition of new autonomous flight modes, including a one-touch Hyperlapse, alongside improved flight time - make this a creative tool like no other.

For more information on the DJI Mavic 2, visit the product page here.

DJI’s Mavic 2 Zoom is essentially an identical aircraft to the Mavic 2. It was launched on the same day last year and comes with all the same flight modes and safety features, as well as the same external design and performance. The only difference is the camera.

As the name suggests, the Mavic 2 Zoom comes with a 24-48 mm optical zoom camera. Rather than the Hasselblad option, pilots get greater creative license with 4x lossless zoom in full-HD video and DJI’s new Dolly Zoom flight mode.

The Mavic 2 Zoom is a unique tool with zoom options that allow for endless creative potential. With 4x lossless zoom and all the safety and performance features that come with the standard Mavic 2, this is an impressive - if niche - aerial cinematography option.

DroneBase says: DJI’s Mavic 2 Zoom is a interesting creative accompaniment to your standard drone gear. The 4x lossless zoom opens up all sorts of possibilities.

For more information on the DJI Mavic 2 Zoom, visit the product page here. 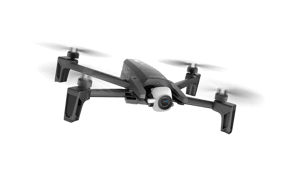 Launched in June 2018, the Parrot Anafi is the French manufacturer’s bold attempt at taking on DJI with a sophisticated and adaptable platform.

The Anafi is insect-inspired. It’s lightweight, foldable and has a few unique features that help it stand out at a competitive price point.

The Parrot Anafi is an affordable alternative to DJI’s higher-end options and boasts a number of creative features and thoughtful touches that help it stand out from the crowd.

The gimbal tilts a full 180 degrees, which allows you to fly underneath a scene and capture it from below. The batteries can be charged with a standard USB cable. Not to forget the main selling points: 25 minutes of flight time, 4K HDR video and 2.8X lossless zoom in a drone of this size is an engineering feat.

The one downside is the Anafi’s lack of obstacle avoidance, which means you’ve got to be extra careful when flying backwards and operating in dynamic environments.

DroneBase says: The Parrot Anafi is an interesting platform with some clever, well thought out features. If you trust yourself to fly with only basic safety aides and want to make use of a camera that can tilt a through 180 degrees, this is the drone for you.

For more information on the Parrot Anafi, visit the product page here. 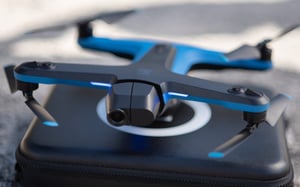 The Skydio 2 is the second drone from California startup Skydio. The original R1 was heralded as arguably the smartest hardware on the market, with industry-leading computer vision and autonomy.

The Skydio 2 takes that to the next level, with less weight, a longer flight time and a higher quality camera alongside improved autonomy algorithms.

The Skydio 2 looks set to be the drone that finally challenges DJI’s dominance. It’s affordable, more capable than anything else on the market (at least in terms of autonomy), and with the introduction of Skydio’s new accessories, flexible too.

The Skydio 2 can be purchased with a Beacon and a Controller. Both extend the drone’s range and can be used to activate a range of autonomous flight modes, while you (in Skydio’s words) “do the doing”.

The Skydio 2 will also be deployed as a professional drone on worksites across the country with the new Skydio Dock. The company will begin shipping the new drone at the start of 2020.

DroneBase says: The Skydio 2 is the most exciting drone release in years. Following on from the acclaimed R1, the Skydio 2 offers all the same and more in a compact (and far cheaper) package.

For more information on the Skydio 2, visit the product page here. 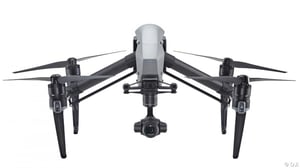 Although it’s been a couple of years since its release, the Inspire 2 remains DJI’s premium aerial cinematography platform. This is the drone you’ll find on Hollywood movie sets. Its status as the top dog is down to two things: performance and versatility.

When used with the Zenmuse X7 camera, the Inspire 2 is a peerless aerial cinematography drone with a balance of speed, agility and reliability.

It can record video up to 6K in CinemaDNG/RAW and 5.2K in Apple ProRes, can reach 50 mph in under 5 seconds, detects obstacles in two directions and has self-heating batteries for operations in challenging environments.

The Inspire 2 also comes with a range of intelligent flight modes including Spotlight Pro, which smoothly tracks a subject for complex and dramatic images.

DroneBase says: Although it’s one of the oldest models on this list, the DJI Inspire 2 remains the benchmark for aerial cinematography - largely because it’s capable of handling the Chinese manufacturer’s professional-grade Zenmuse cameras. If you prize image quality over all else and budget isn’t an issue, this is the drone for you.

For more information on the DJI Inspire 2, visit the product page here. 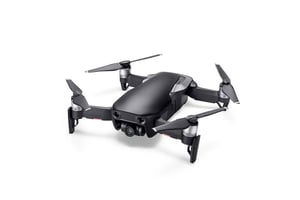 Foldable, lightweight and capable of shooting 4K video, the Mavic Air is DJI’s attempt at providing the market with an accessible middle ground. The Mavic Air was launched in January 2018. It’s portable, smart, affordable, and ideal for use on the go.

The Mavic Air is DJI’s attempt to build a drone that offers the best of both worlds: supreme portability and ease of use alongside a camera that can capture 4K video.

As well as coming with advanced safety features, including environment sensing in three directions (in front, behind and below), the Mavic Air offers a range of autonomous flight modes and innovative creative tools.

The 32 MP Sphere Panoramas are great for capturing expansive landscapes and adding some originality to your aerial photography, while the slow-motion video feature lets you bend time for artistic effect.

DroneBase says: The Mavic Air is a great drone for beginners, despite its advanced features and high-spec camera. It’s tiny, easy to fly and complete with family-friendly modes, like the Smart Capture gesture controls.

For more information on the DJI Mavic Air, visit the product page here. 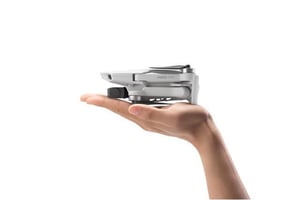 The Mavic Mini was launched by DJI on October 30 2019, more than a year after the Chinese manufacturer revealed the Mavic 2. The delay feels significant, but only because we are so used to a pace of iteration from DJI that other manufacturers have struggled to compete with.

It turns out it was worth the wait. DJI’s most recent drone is arguably the company’s biggest technological feat to date. The Mavic Mini can shoot 2.7K video, stay in the air for half an hour at a time, and has a range of more than two miles. Most incredible of all: it weighs only 249 grams.

The 249-gram mass brings the Mavic Mini in just under the FAA’s registration weight threshold, which is good news for pilots and newcomers who’d rather avoid the expense of registration. But more importantly the low weight makes this, by definition, the safest drone DJI has developed to date.

While it doesn’t have obstacle avoidance, its kinetic energy is low enough to ensure that pretty much any accident is harmless.

DroneBase says: The Mavic Mini looks set to become the go-to introductory drone for beginners. But it’s not only a platform to hone your skills with. The 2.7K video and modes such as CineSmooth mean it carries plenty of weight as a creative tool, too.

For more information on the DJI’s Mavic Mini, check out the product page.

DJI’s Mavic Enterprise hit the market in October 2018. The versatile drone came with the promise of being a tool for everyday heroes, a piece of technology that in the right hands could save lives.

The Mavic Enterprise combines the portable form factor and accessibility of the Mavic 2 with a range of modular accessories to extend the capabilities of drone technology in the fields of search and rescue, fire response and industrial inspections.

What makes the Mavic Enterprise unique is its modularity. It can currently be used with three accessories: The M2E Spotlight aids search and rescue and inspection missions in dark or low-light areas. The M2E Speaker provides recording projection to provide communications during emergency operations. The M2E Beacon meets FAA Night Waiver standards to ensure the drone is visible up to three miles away.

For more information on the DJI’s Mavic Enterprise, check out the product page.

The P4 Multispectral uses DJI’s TimeSync system, which aligns the flight controller and its RGB and NB cameras with an RTK module for centimeter-level accuracy.

When it comes to precision agriculture, the more you can see, the more you can affect. The P4 Multispectral aims to combine ease of use with extensive visibility. Its gimbal-stabilized imaging system houses one RGB camera and a multispectral camera array with five narrow band sensors - meaning it captures visible and invisible light to provide detailed insights into vegetation stress, soil composition, water salinity and more.

DroneBase says: For mass adoption to become a reality, farmers need technology that’s easy to use, accurate, and consistent. The P4 Multispectral delivers on all fronts. 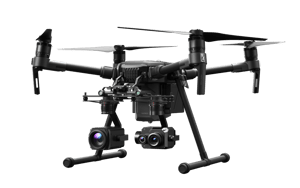 Launched in February 2019, DJI’s Matrice 200 V2 is a rugged, adaptable system capable of taking on all manner of enterprise operations. The V2 upgrades the original Matrice 200 with OcuSync 2.0, DJI’s TimeSync technology, an anti-collision beacon, AES-256 Encryption and AirSense, to ensure operations are safer and more secure than ever.

The Matrice 200 V2 is designed with versatility in mind. On top of working with DJI’s range of cameras and thermal sensors, the aircraft can be used with 3rd party payloads to expand its use in construction, agriculture, public safety and more.

DroneBase says: DJI’s Matrice 200 V2 is an adaptable platform that’s ready to be put to work in several types of enterprise operation. It can be used with DJI’s Manifold 2 and a mobile RTK station / module for AI at the edge and centimeter-level precision positioning.

For more information on DJI’s Matrice 200 V2, check out the product page.

Bookmark this link and check back here often as we'll be continually updating this article throughout 2020 as new drones are announced and released.

If you're looking specifically for drones we recommend for DroneBase Missions, check out this article on taking your pilot career to the next level.