Since we kicked off our partnership with FLIR earlier this year, we’ve been excitedly watching our first group of pilots go through the FLIR Infrared Training Center (ITC) and emerge with new knowledge and skills. FLIR ITC is giving these professionals the tools they need to offer higher value services to DroneBase Clients and their own clientele, taking their careers to the next level.

One of the first DroneBase Pilots to complete ITC is Mike Reilly, who attended the June 2019 class in Charlotte, North Carolina. Mike has been flying with DroneBase for almost 2 years now and recently retired from his career as a Police Officer. He is now enjoying his time as a part-time drone pilot. Learn more about Mike, his experience at the Infrared Training Center, and more.

What was your favorite part of the Infrared Training Center?

This was a tough course about Aerial Thermography, not drone flying. They teach you the science of thermography and its applications including sUAS applications. The instructors are very good.

My favorite part was the flight deck (which was really the hotel parking lot). We got to watch the DJI M210 (I believe) fly with dual cameras. We watched on a large ground ground station nearby. If I had to pick a second thing it would be the food. They feed you very well during the course.

What is your favorite aspect of flying Thermal Missions?

I like the challenges that it presents. This is slow flying with a lot of pre-mission planning. These are not like regular cameras. The cameras have to be calibrated and focused based on your field of view (FOV) and the cameras’ pixel field of view (IFOV).

What helpful tips can you give to other pilots for Thermal Missions?

One thing the instructors repeated over and over in class was that “this equipment is expensive so protect your investment”. Fly slow.. don’t take risks. Put a parachute or insurance on your drone. If you are going to do videos get a 30hz refresh rate for smoother playback. If you can afford a dual camera drone get one.

Apparently, many people are offering thermal services without certification. Their data will be wrong. What you are receiving is a professional license in thermography that is good for 4 years. You can describe what you are seeing and how you obtained it for your clients.

What drone do you primarily fly with?

I primarily fly my Phantom 4 Pro but that presents some problems with thermal cameras. You can get a kit for a decent thermal camera for the P4P but it cuts into the battery life when you are carrying an extra payload. The P4P has one advantage in that its collision avoidance can tell you how close you are to an object which is needed in the thermal calculations.

I recently chose 2 Inspire Pros to carry a DJI XT radiometric camera. 2 = 1 in the drone business in case of a malfunction. Mostly, the decision was based on cost. Ebay has a lot of second hand Inspires for a good price. I needed to be able to afford a good resolution radiometric camera for the big missions so the Inspires were a good fit.

I would like an M210 with dual cameras but those are up in the $30K range. I have to do some missions to work up to that. I have to work within my budget.

What are your favorite things to shoot?

I shoot a lot of everyday nature scenes like sunsets and such. I do wedding shoots, engagements, graduations, real estate, roof inspections, luxury cars etc... I also like site surveys with DroneDeploy because it is easy. The drone does most of the flying for you.

What is your favorite aspect about being a drone pilot?

How did you first become interested in drones and why did you decide to pursue it as a career?

I have always been interested in the latest computer technology. In addition, photography became a hobby when I lived near Pearl Harbor at one time. I continued with photography as a career Police Officer.

One day, I saw a larger drone being flown at a local mall. I knew I had to have one then. I ran that that thing into my backyard bushes many times trying to learn to fly. The drone had a really good camera for it’s time (14mp) and I thought I could make some money with it. However, that never happened until I moved up to DJI Phantoms. I found them much easier to fly.

What was your best piloting experience?

I was called at the last minute to do two big box hardware store roof inspections. I never did anything that big before but the missions went perfectly. I used an autonomous flight app. It was impressive how the drone came back to change batteries and then headed out again. 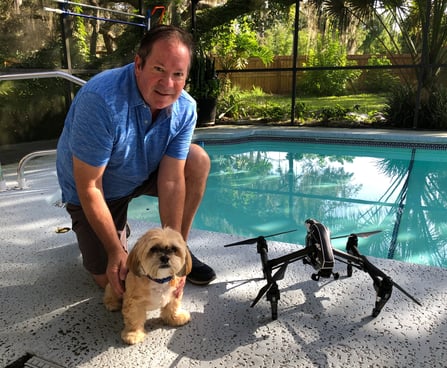 My dream drone would have six props and 3 hot swap-able cameras. I'd want it with dual parachutes, EM shielding, 360 camera gimbals, anti-collision sensors, intelligent flight, Drone Deploy, Pix4D capable and RTK capabilities. I'd also like it to be waterproof with snap on pontoons for over-water flights. Plug and play modules would be nice for replacement parts too.

A problem I ran into on some missions was signal loss from nearby buildings. It would be nice if the drone could have some signal extender capability so I could fly one up and land it on the roof to increase range while the other flew its grid. Maybe they could be synchronized.

I am very grateful that DroneBase helped me take this class. It was very educational and moved my piloting skills to a higher level. This is a serious class for a professional license. You’ll be in the room with pilots of all skill levels. You can learn a lot from listening to the other pilots talk about flying, equipment and marketing of your services.

A word of caution here. You only have 30 days to do your mandatory field assignment so make sure you have access to a thermal drone camera. I didn’t have mine yet so I drove six hours to work with a friend from class who had access to one.

We’re looking forward to giving Mike, and other pilots who have completed ITC, more opportunities such as Thermal Client Missions.

Are you interested in getting certified in aerial thermography? As a DroneBase Pilot, you have access to an exclusive discount. Head over to our FLIR page to learn more and sign up.