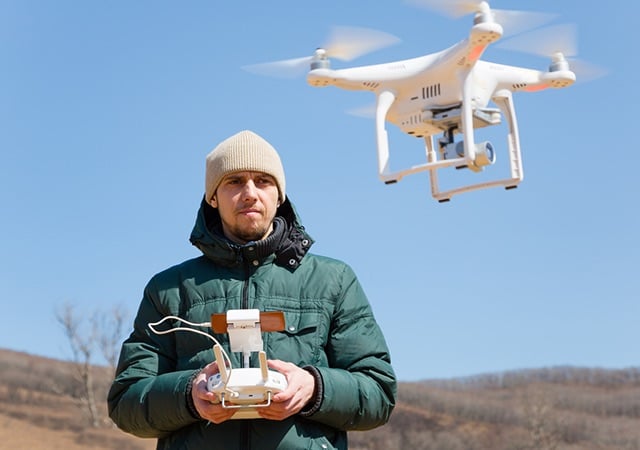 A Snapshot of Drone History & Innovation

Quadcopters are becoming more and more common in our skies, whether they're capturing landscapes, snapping aerial shots for real estate videos or gathering commercial data. But there was a time when drones - at least as the term is widely understood now - were little more than a science fiction concept. Drone history has been a relatively short lived affair, but they have come a long, long way in a short space of time.

As with most modern technology trends advancing in line with Moore's Law, drones have managed to grow more sophisticated while shrinking in size. But unlike mobile phones and media players that don't rely on the fundamentals of aerodynamics to work properly, the shrinking of drones is only practical to a certain extent.

Elsewhere there have been innovations in speed, GPS accuracy, obstacle avoidance technology, safety and tracking capabilities. Arguably the biggest leap has been in software, which has slowly moved the burden of control away from the pilot and handed it to increasingly smart autonomous systems.

Back in 2010 there wasn't much of a consumer drone industry. But then French technology company Parrot introduced the AR Drone, the first quadcopter to have built-in cameras, altitude hold and the ability to share a live feed with a smart phone through an easy-to-use app. It was a revelation in drone history.

Understandably, it wasn't long before other manufacturers set up and got involved in the emerging drone scene. By 2012, Parrot had sold hundreds of thousands of AR Drones and released a second iteration, the AR 2. Many saw the potential of flying cameras for aerial photography and a range of commercial applications, such as real estate videos, but no company yet had the combination of photography expertise and engineering nouse to introduce a serious, affordable offering to market.

Enter GoPro or, more specifically, manufacturers developing drones that would be compatible with the popular action cameras: mainly DJI and 3DR. DJI was first, launching the first drone in its now revered Phantom range in 2013.

The Phantom 1 was designed to be used with a GoPro Hero and was first to introduce the concept of 'Ready to Fly' to the mainstream aerial photography market in drone history. However, the battery life was 15 minutes at best and the lack of an integrated camera meant that pilots could only see what they had captured once a flight was complete. However, in a sign of things to come, DJI quickly iterated the original Phantom and turned around new models later that year: the Vision, which had its own built-in camera, better flight time and a return-to-home function. The Phantom 2 came along soon after.

In 2014, the focus of the consumer market shifted from China and Europe to the USA, where 3D Robotics (3DR) moved from selling build-your-own drone kits to ready to fly models such as the Iris+. The Iris+ introduced waypoint planning, follow-me technology and an adaptable geo-fencing system to recreational flyers for the first time in drone history. It was arguably the start of an industry-defining struggle between 3DR and DJI.

2015 remains the most significant year in drone history of the consumer drone scene. Having raised tens of millions of dollars in funding, 3DR went all out to develop and launch the company's flagship drone, the Solo. And the folks at DJI were nervous. In fact, according to Forbes, that spring DJI founder Frank Wang travelled to California and offered to buy 3DR rather than compete against it. Weeks from shipping the first Solos, 3DR CEO Chris Anderson declined the offer.

Unfortunately for 3DR and the American consumer drone industry, DJI's Phantom 3 beat the Solo to market and outperformed it in terms of sales before being quickly iterated and rapidly discounted. The P3 Professional offered 4k video from an integrated camera riding on a 3-axis gimbal. Market domination had literally never looked so good. Despite plenty of clever features, the Solo was plagued by delays, weakened by manufacturing issues and left 3DR burdened with costs, forcing the company to move away from the consumer market entirely.

I’d never seen a market with price declines like that. Everybody other than DJI lost.” - Chris Anderson, founder of 3DR.

By 2016, drone pilots wanted more. Now that autonomous flight and battery life had reached acceptable levels (one of the major struggles throughout drone history), the focus was on making drones - a significant investment even at a consumer level - safer and more dependable. A big part of this was obstacle avoidance technology, but there was also a need for more sophisticated take-off and landing features.

Intel introduced its RealSense computer vision system at CES 2016 in the Yuneec Typhoon H, while DJI's Phantom 4 was announced a few months later, setting the bar for both safety and innovation.

The most recent phase of innovation that we've seen in the timeline of consumer drone history has arguably been portability. In an effort to make consumer drones more accessible and newcomer-friendly, several manufacturers have produced smaller, more portable drones.

Notably, we've seen the rise and fall of the foldable GoPro Karma, which, after a damaging recall, is now back on sale and offering the most significant American presence in the consumer drone market.

Other obvious examples of the push towards portability are DJI's Mavic Pro and Spark drones. The first is foldable while the second is downright tiny. Yuneec, ZeroZero Robotics and countless other manufacturers have also begun to target the 'selfie drone' market with smaller quads. These family friendly options have also seen the introduction of gesture recognition, as drones become more aware of their surroundings and learn to interpret our movements better.

Who knows what's next to come from the rapid innovation driving consumer drone history? Battery life remains an issue for most pilots, although fixed-wing models like the Parrot Disco appear the best solution to that. One thing's for sure: aerial photography technology is moving on up.

Want to join the revolution? Sign up to be a DroneBase pilot today.